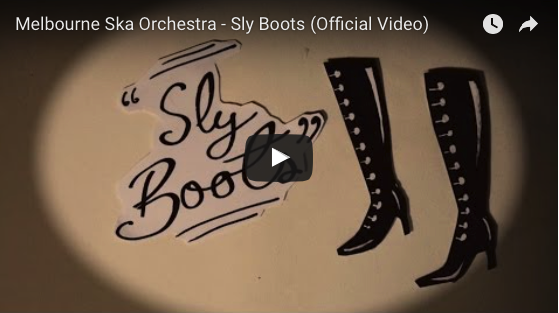 ‘Sly Boots’ is the third single from our new album ‘SIERRA-KILO-ALPHA’, which was named in Rolling Stone’s ’50 Best Albums of 2016 So Far’.

Its Felix the Cat meets Monty Python on a Melbourne summer evening in Fitzroy. We’re just havin fun in the clip, which is exactly what we do on stage.

We worked with the Jacobsonson production team for filming/editing and Morgan Quinn for the cartoon characters. All filming was made up quick and on the spot, with a respect to the cartoons and animations that were part of our childhood.

The concept came from a short animation that Morgan (Rudekat) had done, we rang him and he said “skoopidorama. I’m flat chat and have to go away… but it sounds like fun… I’ll do it. What’s the Deadline?”

…We got it out before MSO hit the Main Stage at Splendour In The Grass and then head over to the UK in August, for 9 shows! The UK tour is in support of the new album release via Proper Music UK and will take in shows at London’s The Garage, Boomtown Fair, Kaya World Music Festival, and Edinburgh Fringe Festival (for 6 nights).

See you on the dance floor somewhere… Skavoovie!

To celebrate the release of the new single, our good friends at iWorld Australia are offering another cool prize to win – A HolySmoke bundle that includes 1x Black Newnest Bluetooth Speaker (Normally $299.95) and 1x Black Motif Headphones (normally $49.95).

Simply head to our Facebook page to enter the comp: