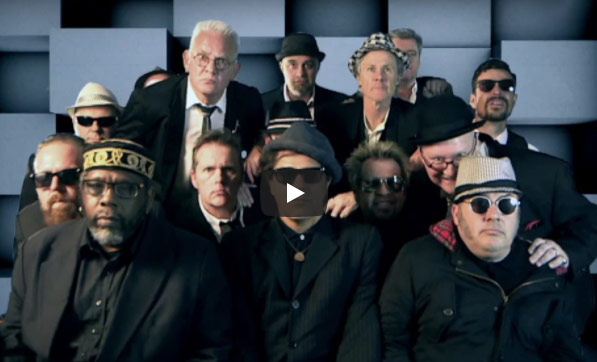 Nicky Bomba elaborates,” The song originally came together in a writing session with Punnu Wassu, an Indian harmonium player and teacher. I wanted to explore the idea of rhythms within rhythms so you could shift your pulse focus by feeling different elements in the song. The circular nature of the groove aligned itself with the Indian philosophy of creation and destruction, the end is the start is the end etc…

This obvious connection with that concept and Escher’s perpetual art gave me the framework for the lyrics. We brainstormed ideas about our perception of life on this planet, the circular nature of the universe and how the arrangement of the song could reflect that journey. Once the orchestra started jamming it I felt there was something special as everything was falling into place. It ended up being the flagship song for mixing.

The crowd unison chorus really captures the essence of all of us on this boat/spaceship celebrating and questioning our existence in this wonderful world.”

Nicky continues, ” we had a a lot of ideas floating around for the clip and Jesse showed me some of the work he was doing with 3D imaging in the gaming world. We spent an evening shooting and jammed lots of possibilities with the orchestra. He then went to town with his skills and with Clay and myself offering suggestions the clip was complete. I’m really happy with the result and I think its a great showcase for Jesse’s talents.”

Escher is the third single from the Aria Award winning Sierra-Kilo-Alpha out now on FOUR FOUR.